The estuary is right at the core of the North Devon Biosphere reserve. It is tidal well above both Barnstaple and Bideford, the tides often concentrate birds on shoreline mudbanks as the tide comes in and then again on sandbanks which are exposed as the tide drops.  The estuary covers a a very large area (approx 100 square kilometres) and has many different areas of interest.

Birding the Taw and Torridge estuary in January provides a great opportunity to kick-start your New Year list with good numbers and variety of Wildfowl, Waders and Gulls. It’s also guaranteed for Spoonbill and Little Egret. Peregrines regularly hunt along the estuary.

Where to go: Starting at the mouth of the estuary; on the south side is Northam Burrows Country Park, with its amazing pebble ridge backing the vast beach at Westward Ho! Scanning the sea from Westward Ho! (SS430292) can provide views of wintering Divers, as well as a small number of Purple Sandpipers on rocks around the seawater swimming pool. Access from the B3236 at Westward Ho! (by the bridge the rough area regularly hosts Snipe and Jack Snipe). At the eastern side of the park is the Skern where many Waders, Wildfowl and Gulls roost at high tide. Access is from the Bideford – Appledore road (A386) at Broad lane SS458300. It is easy to watch the area from your car, looking out over the mudflats as the tide comes in, birds congregate on the saltmarsh where the road ends. The roost is dominated by Herring Gulls and Oystercatchers, but good numbers of Curlew and Dunlin also fly in and smaller numbers of Redshank, Great Black-backed Gull, Black-headed Gull and Grey Plover. There are often flocks of 100’s of Golden Plover worth checking for American Golden Plover. Look out for occasional Knot, Ringed Plover, Turnstone and either Godwit. Wigeon and Shelduck gather along the shore, and the regular flock of about 170 Dark-bellied Brent Geese is worth checking for a few Pale-bellied. Several Cormorants join the throng. It is worth checking all the small Gulls for Mediterranean, which often occurs here in small numbers. If all the birds fly up, keep an eye open for Merlin, although the panic is more likely to be caused by a Sparrowhawk or Peregrine.

Moving on around the estuary to Appledore, you can look over the confluence of the two rivers to Crow Point in the north, and Instow to the east. It is often possible to see Great Northern Diver in this area, or out towards the mouth of the estuary. Between the lifeboat slip and the Appledore Churchfields car park (good WC’s) a male King Eider took up residence in early 2008, and it returned for another sojourn in the autumn too, so worth taking a look! Moving south to Bideford, anywhere between the Old bridge and Victoria park car park 400 metres north of it is a good viewpoint for checking out the local Gull flock for possible Iceland, Mediterranean, or Ring-billed Gulls recent winters have also seen both Laughing and Franklin’s Gulls here. Little Egrets are ever present around the whole estuary in small numbers so keep an eye out in the river shallows. Further into the Torridge estuary, at Landcross the smaller river Yeo is a good place to look for wintering Green and Common Sandpipers.

Much of the estuary from Bideford all the way round to Heanton Court has excellent access from the Tarka trail, where the old railway line has been converted to a footpath and forms a part of the National Cycle Network.

Moving round to Instow, it is worth parking along the beach front here and looking for Ducks on the water, there is often a large flock of Wigeon, with accompanying Teal and the occasional Shoveler.

The next port of call is the small RSPB reserve at Isley Marsh. Access is from the B3233, take the minor road (SS486317) signposted to the Estuary business park. Drive to the Tarka trail and walk east along the trail for about 300 metres, before turning left at the RSPB sign out to the edge of the estuary. Numbers of Wigeon and Teal can be impressive here, and it is the best place for the wintering group of Spoonbill (there were six this winter). At high tide, Waders, Herons and Gulls roost here too. Curlew, Lapwing, Redshank and Grey Plover are the most likely to be encountered, but look out for Greenshank and Spotted Redshank too. There are often up to a dozen Little Egrets, but don’t expect to see many at low tide – they mostly disappear into the many channels in the saltmarsh. Other Ducks can include Shelduck, Pintail, Shoveler, Mallard, and possibly Gadwall. You can walk on right around the old power station site (look in at the pool inside the wire fence – it holds wintering Little Grebes) to the oil jetty north of Instow, where the mix can be boosted by Great-crested Grebe. Black Redstart can also sometimes be found on the tide-line at this time of year. Sadly this area is not accessible by wheelchair users. Peregrines often hunt across this part of the estuary, and Buzzards can regularly be seen over the surrounding hills. The energetic could walk (or ride their bike!) along the Tarka trail all the way to Barnstaple from here, with excellent views from the south bank of the river Taw with the sun behind you at this time of year. This part of the estuary south of RMB Chivenor can be where the wintering flock of perhaps 600 Canada Geese may be found. At Fremington creek (access from the B3233 at Muddlebridge signposted to Fremington Quay), is a great place to see lots of Redshank, and there are regularly a few Greenshank while Spotted Redshank is reliable here too; check the saltmarsh on the far side for Snipe – there are usually a few lurking in the vegetation. This is also a good site for Kingfisher. On the Tarka trail here is a lovely café for hot drinks or lunch in the building which used to be the Fremington Quay railway station. Moving on east along the Tarka trail, you will come to Penhill saltmarsh, which is a good site for both Canada and Brent Geese. It is also another place where Little Egrets roost at the edge of the marsh at high tide. The sandbanks in mid river are the best spot for the local flock of Golden Plover often given away by the whole flock calling their plaintive whistle. Lapwing are common here too, often the target of Peregrine. The mid-stream sandbanks between Penhill and Barnstaple’s new downstream bridge hold good numbers of wintering Gulls, mostly Herring and Black-headed, but some Lesser Black-backs winter too, and Common Gulls are always worth checking to rule out Ring-billed. (I found a Laughing Gull just downstream of the new bridge in January 2007). Curlews are common here. Little Egrets chase small fry in the channels, and Grey Herons gather in small groups to take advantage of fishing opportunities. Between the old and new bridge there are often a couple of Little Grebes, and another flock of loafing Gulls to check through.

Turning back westwards along the north side of the estuary, adjacent to Pottington Industrial estate is a good place to check all the smaller Gulls for the occasional Mediterranean. Small flocks of Linnet and Chaffinch feed along the tide wrack on the saltmarsh here. The Canada geese also feed here. Oystercatchers, Curlews, Lapwings and a few Redshank are regularly seen here. At the western end of the Industrial estate, Devon Birds has a small closed reserve (Bradiford Water) with a freshwater pond and scrape easily viewable from the Tarka trail. Good numbers of Teal feed and rest here, along with Wigeon, Mallard and Little Grebe. The river regularly hosts Kingfisher. At high tide the surrounding fields also host flocks of Curlew, Lapwing and Golden Plover. From the trail, it is easy to set up scope and check all the Gulls on the estuary, the flocks are often close by. Continuing along the trail, look out for Peregrine which often sits out on one of the sandbanks after an unsuccessful chase. At Heanton Court (drinks/lunch/WC) look for Greenshank along the water’s edge. The alder trees sometimes have Siskins along here.

Braunton Pill is another site worth checking for Waders and Gulls. You should also look for Water Pipit here, if not by the river, then try Sherpa Marsh on the East side of the river opposite Velator harbour. – Take the A361 from Barnstaple and after Wrafton turn left at the first roundabout, go straight across the second, and follow signs to the toll road. You can either park on the road adjacent to Velator Quay SS484354 and walk south along the west bank of the pill as far as the main estuary (and indeed, on to Crow Point), or drive down the toll road (£1.20 when I last drove it) to Crow Point. This quiet road allows great views over Braunton marsh and Horsey Island – stop in some of the lay-bys and climb the embankment to view. If you’re very lucky you may see Hen Harrier, Short-eared Owl, Merlin, Barn Owl or Little Owl, but they are by no means regular. Flocks of Curlew, Golden Plover and Lapwing rest in the fields when the tide is in. At the southern end of the road you can walk through the dunes to the estuary mouth and be almost opposite the Skern. You could, at a push, do all this in one day, and it should be possible to see in excess of 60 species.

Last winter North Devon hosted at least five of the influx of Cattle Egrets so keep an eye on the fields surrounding the estuary.

Sites and access: Most of the sites described have easy, free access, and there are regular buses from Barnstaple Bus station to both Bideford and Braunton. Most are also wheelchair friendly except the RSPB Isley Marsh and Braunton Pill/Crow Point. 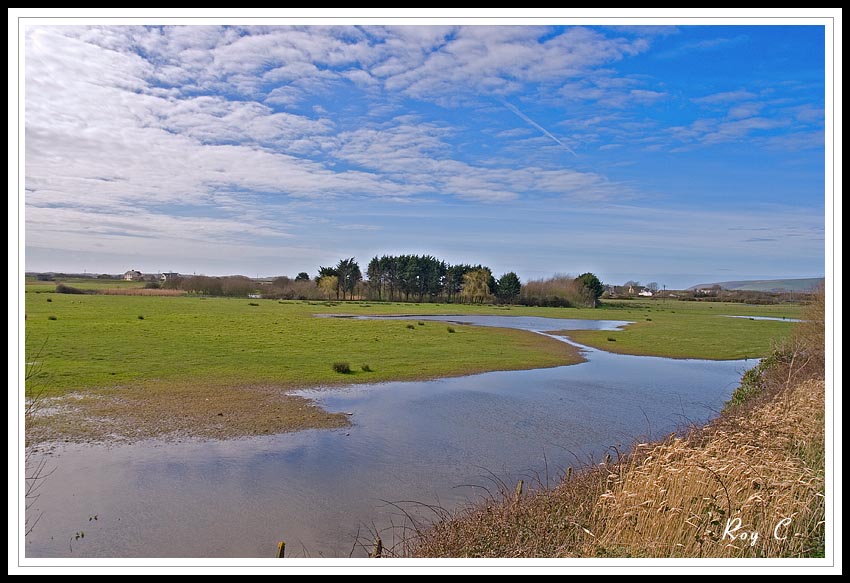 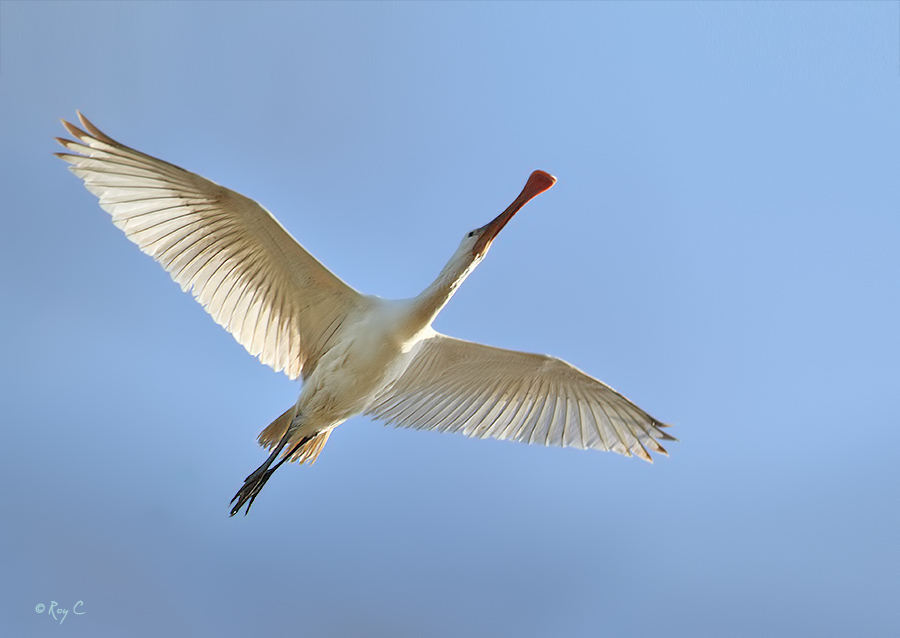 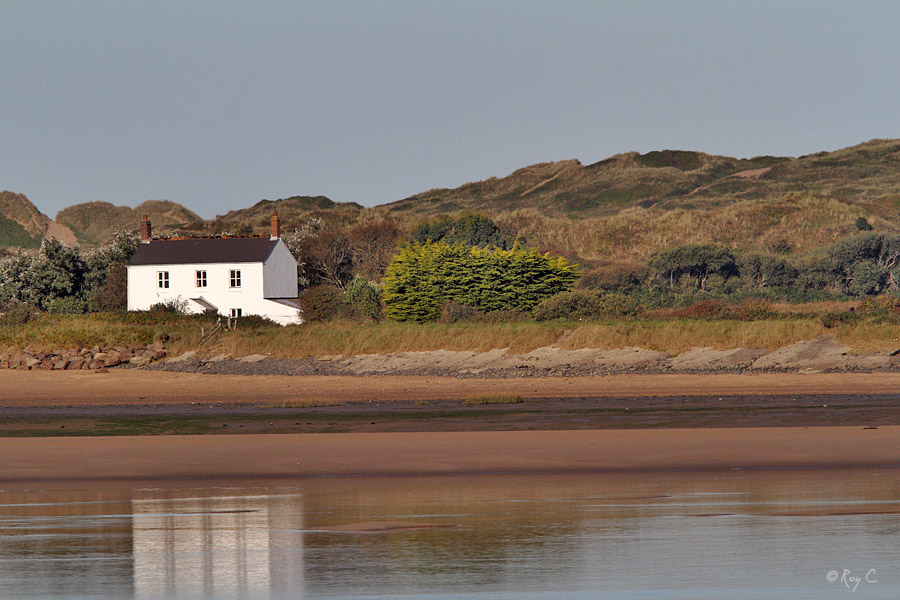 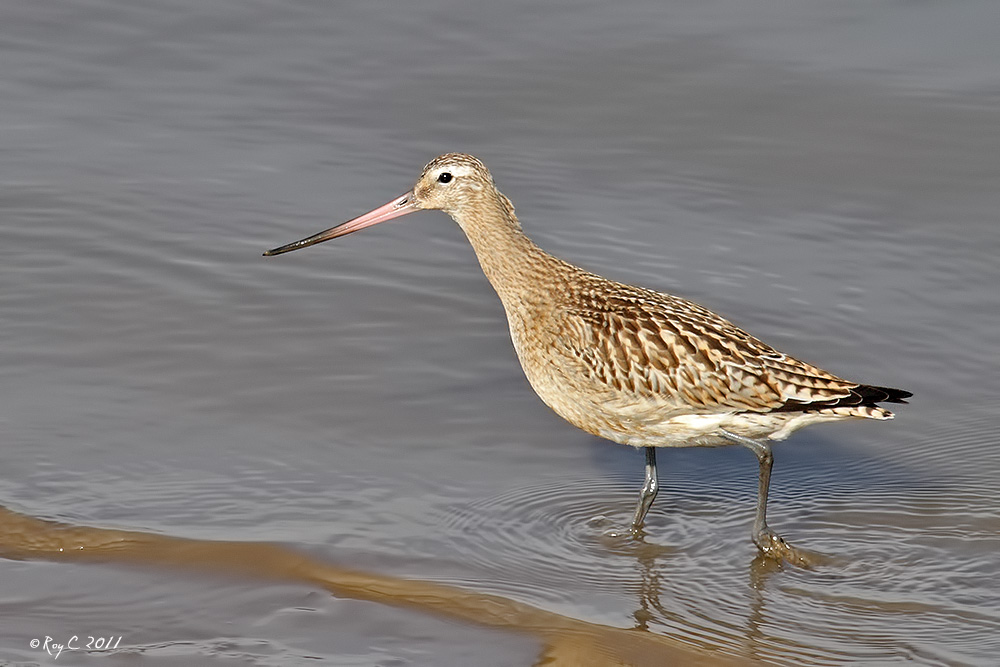 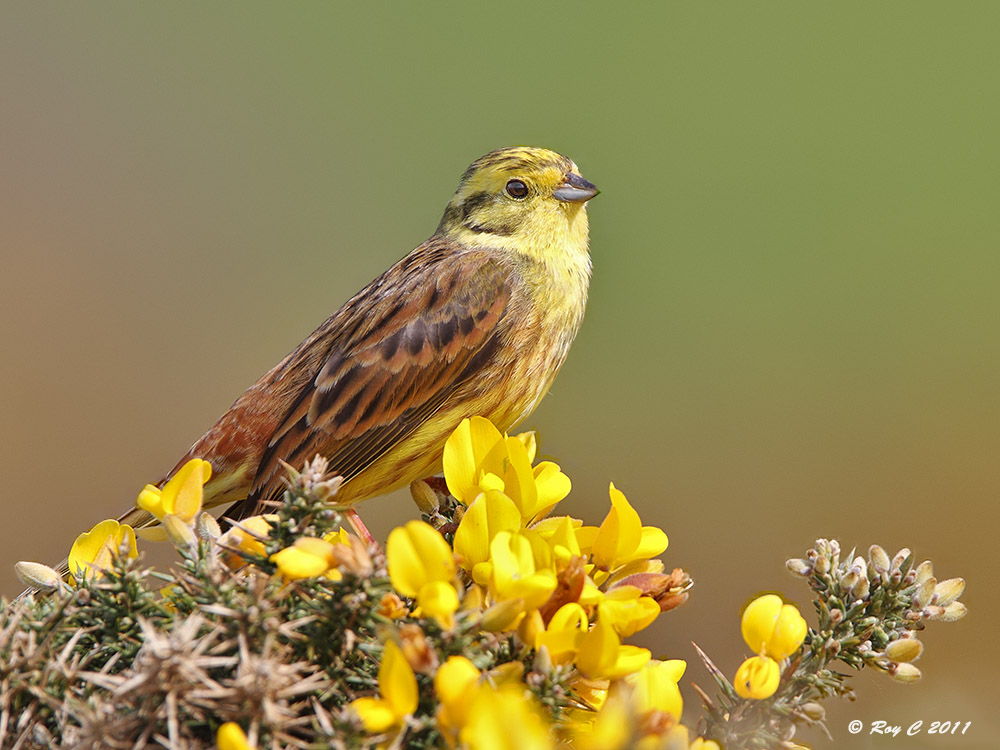 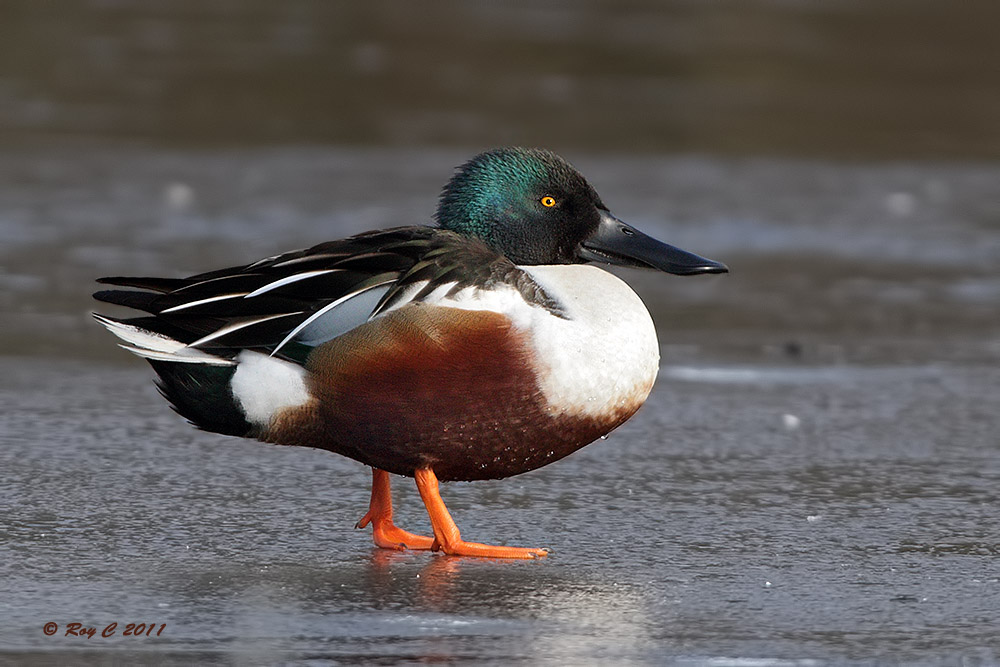