Macaronesian Shearwaters – will we see more and if so where?

First heard calling from the steep bracken-covered slope above the Landing Bay by Chris Townend and Helen Booker on the night of 4–5 June 2010, Lundy’s Macaronesian Shearwater was in the same area again in 2011 – and hopes are high that it will return again in 2012.

2012 may not, however, be the bird’s third visit to the island. In 2009, whilst night fishing from the jetty, then island chef Carl Pimlott heard a strange call emanating from the nearby cliffside. Using his mobile phone, Carl made a sound-recording in which the faint but distinctive calls of the bird can be heard. It was only after Chris Townend’s sound-recording a year later that Carl’s recording came to light.

Using more sophisticated equipment, Carl made a more substantial recording of the calls in 2010, and this can be heard – amidst the calls of Manx Shearwaters – in the accompanying sound file.

Never seen either on land or in flight, the shearwater’s calls – a somewhat maniacal, whistle-like, half-cackling, half-laughing, four and occasionally five-note call, clearly distinguishable above the longer, slower, lower-pitched, throaty calls of the Manx Shearwaters – have been the only evidence of its presence.

Formal acceptance of the record is still awaited from the British Birds Rarities Committee, which is carrying out a review of all North Atlantic Little Shearwater records in the light of recent identification papers. An account of the bird’s finding, published as a Short Note by Tim Davis in the August 2011 issue of Devon Birds Journal.

An interesting looking weather system was due to arrive on 7th June, watching the weather forecasts and synoptic charts on the evening of 6th June I realised this was going to be no normal June storm and decided to get to the seawatch point soon after dawn on 7th. I walked out in dull but good light at 5am and settled down to start seawatching at 5.15am. Hopes Nose (4 miles to the north) was obscured by mist and occasional rain showers, this was looking good – anything pushed into Lyme Bay overnight by the strong S winds and reduced visibility would be moving out, west and south, right past Berry Head. There were plenty of Gannets and several smaller groups of Manx Shearwaters all passing close to shore, some groups slowing down to feed before moving on. I was pleased –  it meant I could use my binoculars resting on top of my forward pointing telescope (which is therefore pointing in the right direction and already pre-focused at the passage distance) which keeps eye relief at a sustainable level for a long seawatch and a much bigger field of view. Nearly all the birds were passing close enough to pick up and identify with only the binoculars, including a Puffin (not very common of S Devon) and Razorbills amongst the local Guillemots, Kittiwake, and passage Common Scoters. I swapped to telescope only for closer views of anything I picked up through my bins.

At 5.45am I picked up a small group of Manx Shearwaters approaching from the north heading south. Very quickly I was drawn to one that was flying differently with a more flappy flight, short glides close to the sea with only occasional shallow arcs – unlike the Manxies it was with which were less flappy, high banking and gliding more. As I concentrated on this bird I realised it was smaller than the Manxies (estimate 1/5 smaller wing span), gliding on straighter more rounded and slightly (more than Manxies) bowed wings, and looked shorter but fuller tailed, my heart started racing this was more like a ‘Little’ (sorry still old school on some names!). I concentrated more, waiting just a little longer to ensure when I transferred to the scope I would know exactly where it was, as I watched the distinctive head raising flight action became too much to bear. Through my scope I picked up the whitish face and isolated eye. The bird was still distinctly more fluttery and still head lifting. The wing shape was different from the Manxies being a little shorter in proportion in the hand and distinctly more rounded tip to the hand – perhaps exaggerated as the wings were held straighter than the Manxies around it (which had more angled back wings) I also noted that the black on the sides of the lower neck and shoulder area was less extensive than the nearby Manxies and that the white ‘thigh’ did not rise as high or was as extensive into the sides of the rump as the Manxies around it.

However my previous experience of Little Shearwater was from the Plymouth – Santander Ferry in the Bay of Biscay during late August in bright sunny conditions gave me, perhaps, an over exaggerated impression of what to look for on a British bird in June! I was disappointed I could not pick out the pale silvery/white greater coverts (not realising at the time that these would be moulted on an adult/or near adult in June) I looked really hard for this feature – it did make me pick up that the bird was in active wing moult with symmetrical moulting of some of the inner primaries on both wings. I also was not struck by the amount of white in the face – I remember the Biscay birds in bright sunshine looking like the whole front of the face head almost glowing white. This bird showed the white surround to the eye and whitish cheeks but not striking as I remembered from Biscay. The black on trailing edge of the flight feathers was also troublesome I remember the Biscay birds looking almost like they had white underwings with just a thin black trailing edge – not like this bird (on reading up later – these birds in Biscay were probably mostly dispersing juvs in fresh condition and perhaps adults which had completed their wing moult). Was I looking at a Boyd’s Little Shearwater? I knew they should look closer to Manxie particularly on the primaries – this bird had restricted black on the primary bases but still a little more than I could recall from my previous experience of Barolo’s (Little) Shearwater. I was a little confused but still knew that I was looking at a Little type shearwater. I have seen Audubon’s Shearwater off Tobago these look darker dirtier and longer tailed than this bird, (and probably closer to Boyd’s Shearwater) so this possibility was ruled out.

The shearwater started slowing down and head lifting even more, the Manxies around began to flutter and plunge into the sea the Little Shearwater followed too. It went onto the sea with a larger group of Manxies but disappeared immediately under the water. It surfaced with the Manxies but unlike the Manxies dived repeatedly and quickly. I zoomed up to 30-40x when it did surface it was sat briefly with the Manxies – it was distinctly smaller, shorter necked,  whiter faced, more rounded head shape and straighter black line down the neck. After a couple of minutes the group of Manxies were joined by more investigating Manxies which then all moved off south in a slow investigatory manner. The Little was trickier to pick out now in the larger group, it was smaller and more fluttery and still looking white faced but even the Manxies looked rounded winged and more fluttery as they investigated the sea below them. I eventually lost the bird as it flew around the corner of the headland joining an even bigger group of feeding Manx Shearwaters. looking back-on at a group in a more exposed position in fairly rough seas made it impossible to pick the bird up.

In total I watched the bird for some 6-8 minutes it was on view all of the time (except when diving during perhaps 1.5-2 minutes period)

I have attached the four pages of field notes made during and immediately after the sighting. I was more concerned with watching the bird and getting as much as I could on the bird during what I knew would be a fairly limited timed sighting.

When I got home I dived into my seabird books and was interested to find in Steve Howells new N American seabird book that Barolo’s shearwater moults in June – perhaps this fitted my bird? I posted my sighting and two pages of my notes on the Devon Bird News Blog site. Very soon I received a congratulating call from Chris Townend who had seen the posting – Chris discovered the calling bird on Lundy in 2010. About an hour or two later he emailed details of some photos taken by his friend Peter Alfrey taken just a few days previously at the end of May of an Adult/nr adult Barolo’s Shearwater – read the blog post.

I was intrigued to see the wing moult of this bird was very similar to my bird and the silvery area on greater coverts was also missing, the trailing edge of the underwing also looked more extensively black presumably again through worn or moulting underwing coverts? 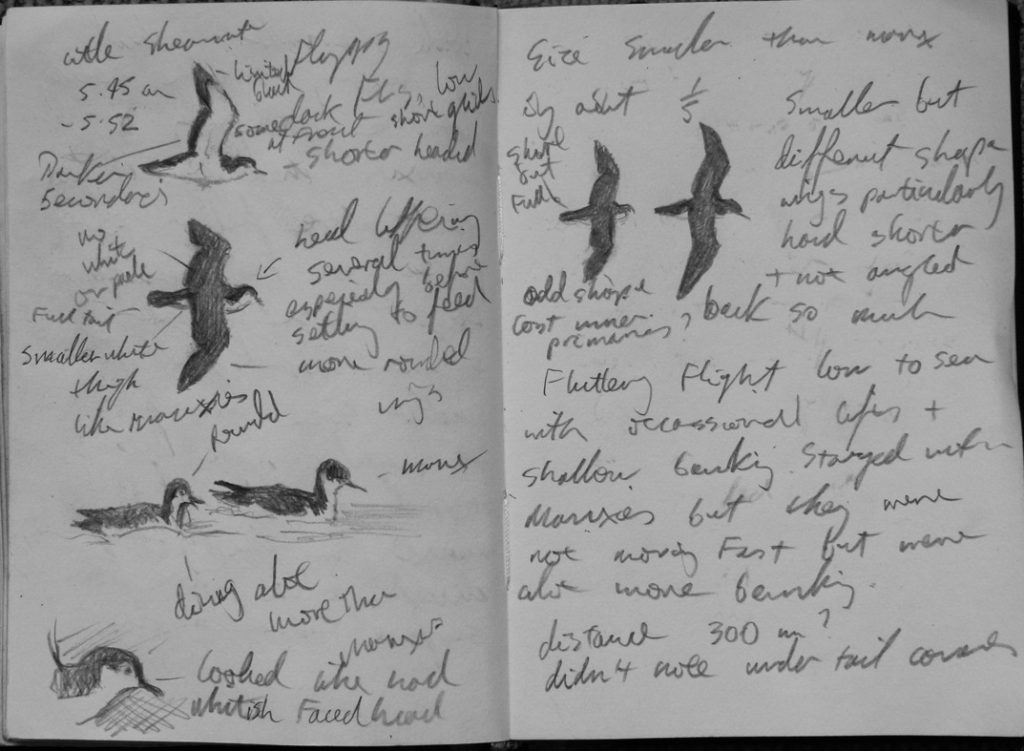 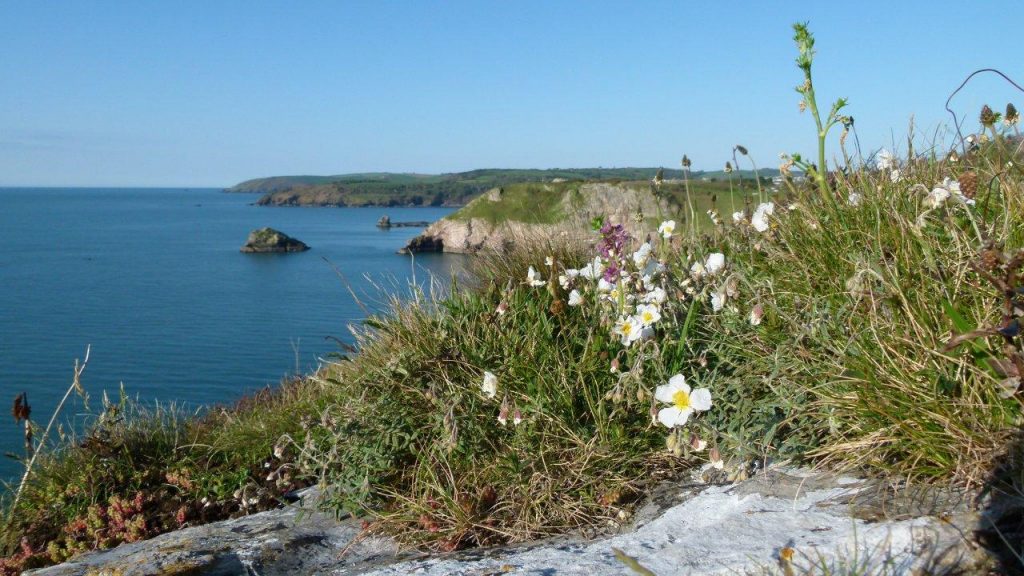 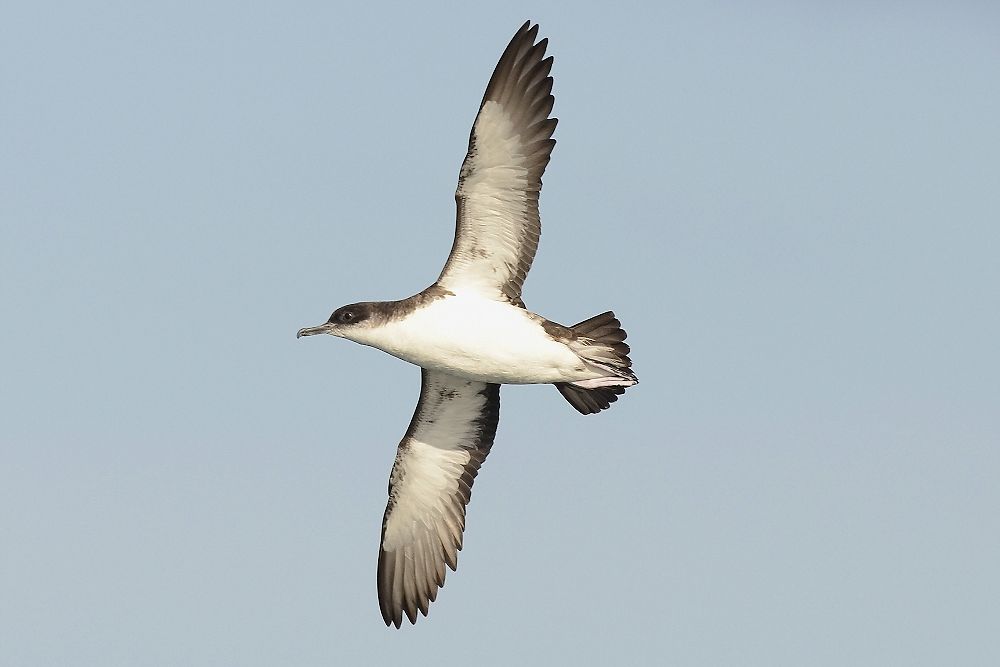