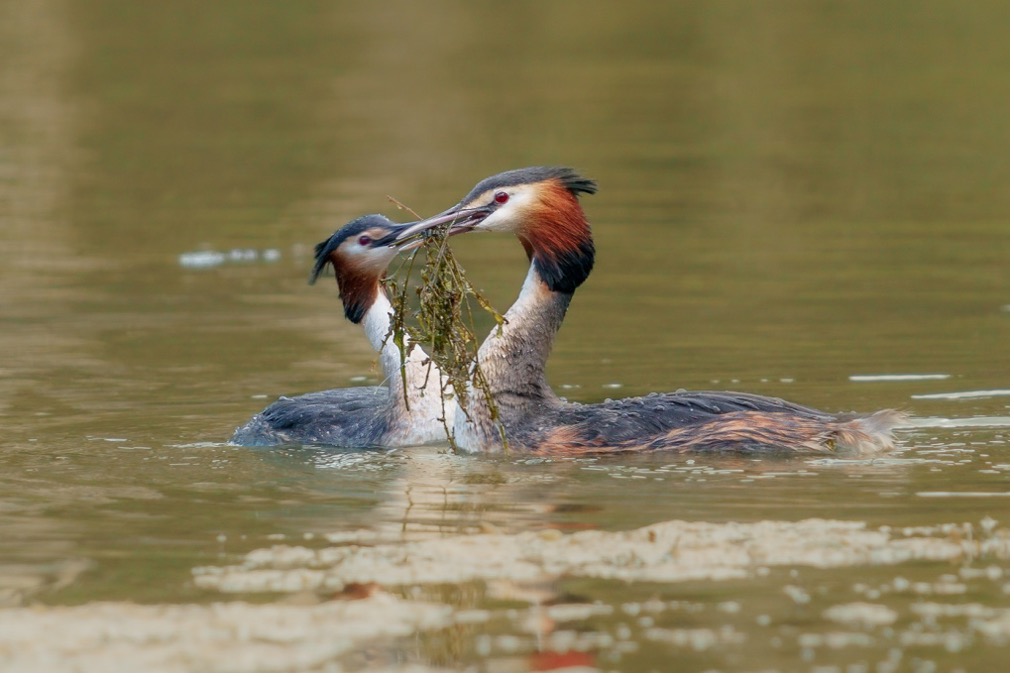 Spring is very much upon us and a favourite time of year for many. It is characterised by profound changes in our natural surroundings and the behaviour of familiar species. Things come to life again and nature begins to sow the seeds of future generations. For many of us it is a time to catch our feathered friends in full action. They are battling for the right to breed, frantically collecting material for nest-building and eventually, for those successful in producing young, feeding helpless offspring. For me, the most captivating parts to observe are the courtship displays and rituals. In gardens, parks, woodlands, rivers and lakes across Devon, birds sing and display with all their might to convince potential partners that they have what it takes to rear young successfully, and none more so than Great Crested Grebes (GCG).

Preferring relatively deep and clean waters, where they can dive in search of aquatic prey, this magnificent bird is found on lakes and reservoirs across Devon. Building floating nests of vegetation, constantly renewed as old material rots away, the charming romance that then plays out is a must-see.

GCGs have a beautiful, ritualised, courtship ceremony involving calling, preening and synchronised head-shaking, culminating in a graceful “waltz” on the water which is so elaborate and enchanting that it changed the course of ethology (the study of animal behaviour).  It was biologist Julian Huxley who made a simple and profound observation in 1914. Prior to him, Charles Darwin had theorised that it was the male who fought for the right to copulate with the female, but both GCG sexes have similar plumages during breeding, and this theory doesn’t fit for this species (you can’t win them all Charlie). Huxley spent hours watching GCGs at Tring, observing and recording many aspects of their ceremony. He noticed that the right to copulate is a mutual agreement. He published his findings in Proceedings of the Zoological Society of London, and they were so well received they changed the practice of collecting and displaying specimens in museums to a preference for observation in the wild, and by the 1920s and 30s ethology was a well-established subject.

It’s on early spring mornings at the water’s edge where you are most likely to witness their bonding spectacle, with either male or female first producing twanging calls. If the other bird responds, they are greeted with several displays and dances consisting of different poses and actions. Firstly the pair begin to reconfirm their partnership by performing synchronised head shaking, bill dipping and preening with head plumes fanned out wide. Further testing the strength of their bond, you may be lucky to observe the famous “ghostly penguin dance” in which one bird approaches the other from beneath the water and invades its partner’s personal space, rearing up out of the water with the neck arched down in a ghostly manner. The desired reply is the ritualised “cat posture” where the watching Grebe ruffles its feathers half-open in a behaviour aimed to defuse any tension between the pair and strengthen the bond further. It is at this stage that you may see magic happen; the pièce de résistance, the “weed dance”. Beginning with some subtle head shaking, bobbing, and preening the Grebes part.  Then each bird dives below the surface to collect a mass of vegetation. Once resurfaced they charge towards each other with heads down and meet almost in a clash. Raising from the water breast-to-breast and frantically paddling to tread water, they vigorously shake their weeds side to side. Only lasting a few seconds, it is a spectacle to watch and something I’ve only witnessed a few times

We are fortunate to have GCGs breeding at Stover Country Park and over the last few weeks I have had the pleasure of running photography workshops for private clients and staff from organisations such as Devon Wildlife Trust and Avalon International.  The aim of these workshops is not only to observe these fantastic behaviours, but also to help others develop their photography skills and learn about species behaviour and field-craft to increase their chances of getting that iconic shot.

Always arriving before sunrise, we found the Grebes most days courting on a corner of the lake just 10m or less from our viewpoint.

Their time was divided between the first stages of courtship displays (such as calling, preening and some head bobbing and shaking), and building their mating platform. They occasionally stopped to fish, often parting for this activity, but soon reconnected, again performing rituals to strengthen their bond

Over the course of the week, we watched the intensity of their rituals increase and then, after many long days, we finally witnessed magic happen. The pair both surfaced with weed between their beaks and rushed towards each other to perform the “weed dance”. This lasted for a matter of seconds, with the pair not getting as high out of the water as we would have liked, but we managed to get a few shots we were pleased with. The GCGs have now begun to build their nesting platform, and all who frequent Stover eagerly await the arrival of young, which I hope to update you on soon.

I run many workshops not only in Devon and across the UK but also globally in locations such as Europe, Indonesia, Borneo, China, Japan, and Costa Rica. My advice to any budding photographers out there trying to capture their subject in that iconic moment is always to be ready. Spend time observing your subject first and become familiar with their patterns. Find a spot where you can get down low and can cover a wide angle with your lens and keep an eye on the light. Also take time to learn your camera settings and parameters. Ensure that shutter speed, aperture and ISO are all set for what you intend to photograph and spend time playing with these to see what is possible in the light you have. Different behaviours play out at different speeds and a good knowledge of light and what each setting allows will enable you to increase your technical skills and your chance of getting the image you desire. This, combined with patience and perseverance, are the keys to successful photography.

For our GCG workshops the light was constantly changing between intense sun and soft cloud cover. Light cloud helps to soften the light whilst still giving nice illumination. We had some good opportunities to increase shutter speeds without compromising too much on ISO. On darker, more overcast days this may not be achievable. Most importantly though, remember to have fun! Going home with that iconic image is not always what it is about, sometimes just getting out, spending time in nature, and meeting like-minded people to share nature with is more beneficial to us than capturing a single image. Be in the moment, share your enjoyment with others and treasure the experience for all its elements.

Article and all photographs: Aaron Hussain